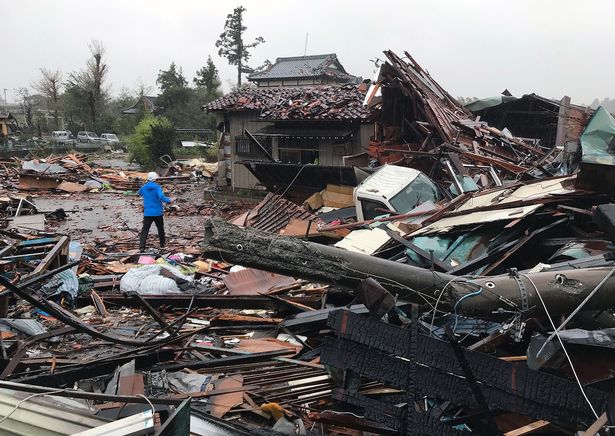 At least 24 people are dead and 17 are missing after the most powerful typhoon to hit Japan in decades destroyed homes and paralysed Tokyo.

Almost 30,000 soldiers and rescue workers have been sent in to save stranded residents in areas such as Nagano, and to fight floods after low-lying land was inundated during Typhoon Hagibis. Military helicopters airlifted stranded people from homes, some cradling their children, after they were trapped by water reaching the roofs of their houses.

Half a million homes were without electricity after Hagibis triggered floods and landslides and spawned tornadoes while packing 140mph winds and bringing record rainfall of almost 40ins in just 24 hours.

The death toll increased on Sunday as officials announced more than 170 others were injured.There were irregular readings from sensors monitoring water in the Fukushima Daiichi nuclear plant which was crippled by a 2011 earthquake and tsunami.

More than 800 flights were cancelled at Tokyo’s Narita and Haneda airports and Rugby World Cup organisers allowed Scotland’s crucial match against host Japan to go ahead as scheduled after fears it could be cancelled.

Hagibis headed out to sea on Sunday evening after churning its way up the northeastern coast and the northern island of Hokkaido.

Shops reopened in Tokyo and many train lines resumed operations, although some bullet services to the worst-hit areas were halted and there was still a risk of flooding in eastern Japan, where rivers were swollen.

Prime Minister Shinzo Abe, who held an emergency Cabinet meeting, said: “The government will do everything in its power to cooperate with relevant agencies and operators working to restore services as soon as possible.”

Footage broadcast on NHK showed fields and vast residential areas in parts of central and eastern Japan covered in brown water, with some of the worst damage caused by Chikuma river in Nagano prefecture.

Military helicopters airlifted stranded people from homes near the river. The first floor of a large aged care home in Nagano city was shown under water.

Rescuers took residents from another flooded aged care facility by inflatable boats and carried them on their backs to safety.

They also searched for survivors in homes destroyed in landslides near Tokyo’s suburbs and in Fukushima prefecture, NHK reported.

Hagibis, which means “speed” in the Philippine language Tagalog, made landfall on Japan’s main island of Honshu on Saturday evening and headed out to sea early on Sunday, leaving behind cloudless skies and high temperatures across the country.

A magnitude 5.7 earthquake shook Tokyo shortly after the storm made landfall.

Authorities at one point issued evacuation advisories and orders for more than six million people across Japan as the storm unleashed the heaviest rain and winds in years.

The storm, which the government said could be the strongest to hit Tokyo since 1958, when a storm killed 1,200 people, brought record-breaking rainfall in many areas, including the popular resort town of Hakone, which was hit with 37ins of rain over 24 hours.

Rain and flood warnings were being lifted in many places, although flooding remained a threat in some eastern parts of the country.

Deaths were reported in areas including the Chiba, Gunma, Kanagawa and Fukushima prefectures surrounding Tokyo, NHK said. Among them was a man in his 60s who was found with no vital signs in a flooded apartment in Kawasaki, NHK said. In Fukushima, Tokyo Electric Power Co reported irregular readings from sensors monitoring water in its Fukushima Daiichi nuclear plant overnight.

In parts of Fukushima and Nagano prefectures, heavy rain caused rivers to flood their banks, submerging houses and rice paddies and forcing some people to climb onto their roofs for safety.Houses along the Chikuma river in Nagano were nearly under water and parts of roads were completely washed out by flooding. Major shinkansen bullet trains from Tokyo began on schedule Sunday, NHK said, while the Tokyo subway system was also operating after disruption on Saturday.

About 1.5 million people in Tokyo live below sea level.

Before and during the storm, the capital’s main airports, Haneda and Narita, stopped flights from landing and connecting trains were suspended, forcing the cancellation of more than a thousand flights. Many people in and around Tokyo took shelter in temporary evacuation facilities early, before the worst of the storm arrived.

Yuka Ikemura, a 24-year-old nursery school teacher, was in one such facility at a community centre in eastern Tokyo with her 3-year-old son, eight-month-old daughter and their pet rabbit. She said she decided to move before it was too late.

“I’ve got small children to take care of and we live on the first floor of an old apartment,” Ikemura told Reuters.

“We brought with us the bare necessities. I’m scared to think about when we will have run out diapers and milk.”

The Rugby World Cup match between Namibia and Canada on Sunday in Kamaishi was cancelled. Two matches were cancelled on Saturday, including England’s clash with France. Canada’s players helped the local community in Kamaishi recover from Hagibis on Sunday. The Canadians said they were planning to host a barbecue for locals and help out in any way they could.

Formula One Grand Prix organisers had cancelled all practice and qualifying sessions scheduled for Saturday. The race went ahead as scheduled on Sunday.