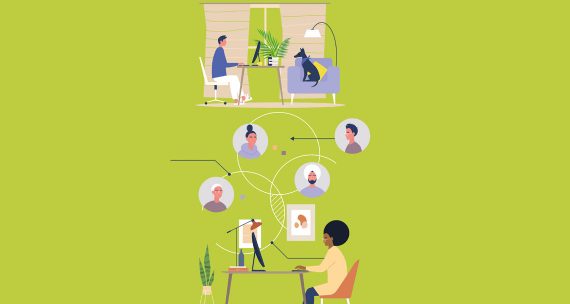 The pandemic has revolutionised the way people view their office across the globe. We look at how office life is evolving in China, the US and France

In China, the pandemic has had little impact on office life. A much shorter lockdown and a company leadership style that favours presenteeism from employees saw office life bounce back quickly.

“Most people want to come back into the office,” says James Macdonald, Head of Savills China Research. “I think there’s also a sense that you are more likely to get promoted or you can only show your worth if you’re there visibly in front of your boss as well.”

This approach is aided by good public transport, shortening commutes in the main cities, and the inability to work well from smaller – sometimes shared – living arrangements.

That said, Chinese cities still face some of the underlying structural changes that, in other countries, have been accelerated by Covid-19. “Some industries where employees spend a lot of time out of the office with clients or on projects – construction, engineering firms, consultancy firms – are looking at hybrid models or more hotdesking,” says Macdonald. China also experienced faster adoption and cultural acceptance of tech solutions such as facial recognition and QR code check-ins at offices, facilitating a speedier return.

The reality is that the pandemic has also had a significant economic impact, which is causing companies to reduce property costs. They are doing this by using space more efficiently or considering cheaper decentralised locations. For example, Shanghai has more than 20 sub-markets, and others being built, often with millions of square feet of offices creating new business communities. “The need to have that 10-minute walking distance to go meet your client is not always necessary given the greater adoption and convenience of online meetings,” says Macdonald. “You can be a little bit further away, but still in the same city, for those more important in-person meetings.”

USA
Hybrid working is expected to have a significant impact as US cities emerge from pandemic restrictions. “Pretty much everyone is looking at some form of a hybrid workforce within the dynamic of how they are going to operate,” says Rebecca Humphrey, Workplace Practice Group Leader, Savills North America. “But the complexity of that varies significantly based on that company, their culture and where they’re located.”

Despite the options, the general view is that net levels of space will broadly stay the same, as two or three days in the office will likely become the norm.

Lines can’t even be drawn between so-called old- and new-economy sectors. “Companies within financial services that are in growth mode, targeting entry-level employees, will need to consider hybrid working, while an established financial services company that is not growing as much has more flexibility,” says Kevin Kelly, Senior Managing Director, Savills.

One broader impact of having more agile workers might be an increased focus on relocating outside of big cities such as New York, San Francisco and Los Angeles. “This will reduce costs as workers struggle to keep up with big city living costs,” says Kelly. Popular routes of migration include California to Texas, and New York to Florida.

France
In Paris, when it comes to teleworking, or remote working, there appears to be a meeting of minds between workers and their bosses. Around 84% of employees wish to make more use of teleworking in the future, while 87% of corporate decision-makers plan to increase its use.

These results, from a panel of respondents from both sides conducted by the Savills Research team in Paris, focused on the high value-added services sector. However, they are seen as indicative of the general impact of the pandemic on working patterns in the city.

“Working from home will be obviously more widely adopted than before the crisis,” says Cyril Robert, Head of Research France – Commercial, Savills. “It will not be the main solution, but there is a desire from both sides. We will see how it will be translated in the facts, but I think it will likely be two days per week.”

Robert says there will probably be a consequent impact on how office space is used. It looks to be possible to reduce the number of workstations by 25-40%, but overall space is expected to be less heavily impacted as more space is allocated per person. Employees are also expressing the desire for more natural light and access to outdoor space, which is not always the norm in Parisian offices.

“In Paris, around 84% of employees wish to make more use of teleworking in the future”

Paris’s future office landscape could also be affected by City of Paris climate-led initiatives. Both directly, with targets for green buildings, but also more indirectly, with planners mulling the 15-minute city concept where people can find all the amenities they need to work and live in their neighbourhood.

“That’s a long-term trend that is more difficult to imagine at this time,” says Robert. “For instance, for a big firm, it means you don’t have one office building where everybody is able to meet, but you have several offices where people are free to go to work or not. That means a total revolution in terms of how organisations work.”