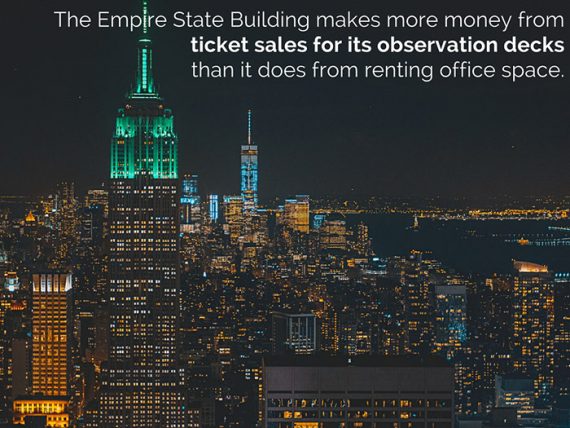 Nice View, and the Profits Surpass All Horizons

The owners of the Empire State Building like to promote it as the most famous office building in the world.

But the real moneymaker at the 102-story skyscraper is not the 2.7 million square feet of commercial space occupied by tenants like the Federal Deposit Insurance Corporation.

It is the view.

The cramped observation decks on the 86th and 102nd floors are startlingly profitable, especially during the holiday season, when tourists swarm the city.

The decks attract four million visitors a year and generated $60 million in profits in 2010, while the owners made little if any money on the office space, according to newly disclosed documents that offer a rare glimpse at the building’s balance sheet.

The financial results at the Empire State Building illustrate how observatories, once considered a modest sideline and a pleasant diversion, have become big business for owners seeking to wring every dollar out of office towers around the world.

Ordinarily secret, the Empire State Building’s finances are buried in a 529-page prospectus recently distributed to partners in the property as part of a proposal to create a $5 billion publicly traded company featuring the building.

The Malkin real estate family, which controls the building, would not comment, saying that it was barred from discussing the property by regulators.

But other real estate magnates were deeply impressed by the revenue from the observatory.

“That’s an astounding amount of money,” said Richard S. LeFrak, whose family owns 40 million square feet of apartment houses, office buildings and hotels in New York and New Jersey. “I would never have guessed anything like that. But the Empire State Building is an iconic structure. People have been making that pilgrimage since they put it up.”

In Chicago, the owners of the Willis Tower, formerly named the Sears Tower and the tallest building in the United States, unveiled glass balconies for the observation deck in 2009 that allowed visitors to look straight down, 1,353 feet, onto South Wacker Drive. Since then, attendance has jumped 28 percent, to an estimated 1.4 million this year.

Top of the Rock, the observatory at 30 Rockefeller Plaza in Manhattan, reopened six years ago after a long dormancy and now pulls in 2.5 million visitors a year and a $25 million profit, according to real estate executives who have been briefed on the project.

Eight companies are vying to operate what would be the largest and highest observation deck in the city — the one at 1 World Trade Center, the 1,776-foot tower under construction in Lower Manhattan.

Five high-speed express elevators are expected to whisk five million visitors a year to a three-level observatory on Floors 100 through 102. If ticket prices were set at $25 each, annual revenues could exceed $100 million, not counting ancillary sales of key fobs, thermometers, coffee mugs and T-shirts.

It remains to be seen whether the observatory at 1 World Trade will undercut the performance of the Empire State Building’s, or establish a new market among the millions of tourists expected to visit the 9/11 memorial and museum downtown. But the Empire State Building prospectus does warn that competition from 1 World Trade and Top of the Rock “could have a negative impact on revenues.”

Still, as it stands now, the unquestioned champion of observatories is at the Empire State Building. Even with adult tickets ranging from about $20, for a trip to the 86th floor, to $55, for those who want to avoid the lines and get to the top, attendance never sags.

“Just about everybody on the planet has seen the Empire State Building thousands of times in movies and television, and they want to visit,” said Barry Tenenbaum, president of New York City Vacation Packages, a tour operator in New York City. “The unobstructed view from the deck does not disappoint. It’s so majestic, thrilling and romantic.”

Even in the 1990s, attendance at the higher, 107-story observation deck at the World Trade Center never exceeded two million.

In the 1930s, when developers in New York City were competing to build the tallest skyscraper in the world, many buildings had an observation deck that offered panoramic views of a skyline less filled with towers.

It cost 40 cents to ride to the 70th floor at 30 Rockefeller Plaza, in what was known as the RCA Building; 55 cents to get to the observatory on the 60th floor of the Woolworth Building or the 71st floor of the Chrysler Building; and $1.10 for the Empire State Building’s observatory.

But that was long before the big crowds, high-speed elevators and timed ticketing turned observatories into profit centers.

Today, the Empire State Building is controlled by Peter L. Malkin and his son, Anthony E. Malkin. They have invested hundreds of millions of dollars burnishing the landmark, including replacing all 6,514 windows.

Now, the Malkins are asking about 2,800 investors in the Empire State Building and the partners in more than a dozen other properties to approve a consolidation of the ownership interests under Empire Realty Trust, the publicly traded company.

The centerpiece would be the Empire State Building, which would account for half the value of the new company’s assets. For decades, the building was a rabbit warren of more than 850 small-time tenants. The Malkins are combining spaces in hopes of attracting larger, higher-rent tenants. As a result, revenue from the office space, which is two-thirds occupied, is expected to climb substantially.

In the meantime, the observatory accounts for the bulk of the profits.

T. J. Gottesdiener, managing partner at Skidmore, Owings & Merrill, the firm that designed 1 World Trade Center and the new observatory at the Willis Tower in Chicago, said architects now understood that observatories were an important revenue source for office buildings.

Mr. Gottesdiener said the decks also offered another benefit. “They create a public function within an otherwise mostly private building,” he said, “giving the building another function within the city beyond its place in the skyline.”