<<   Back
The changing face of global prime residential 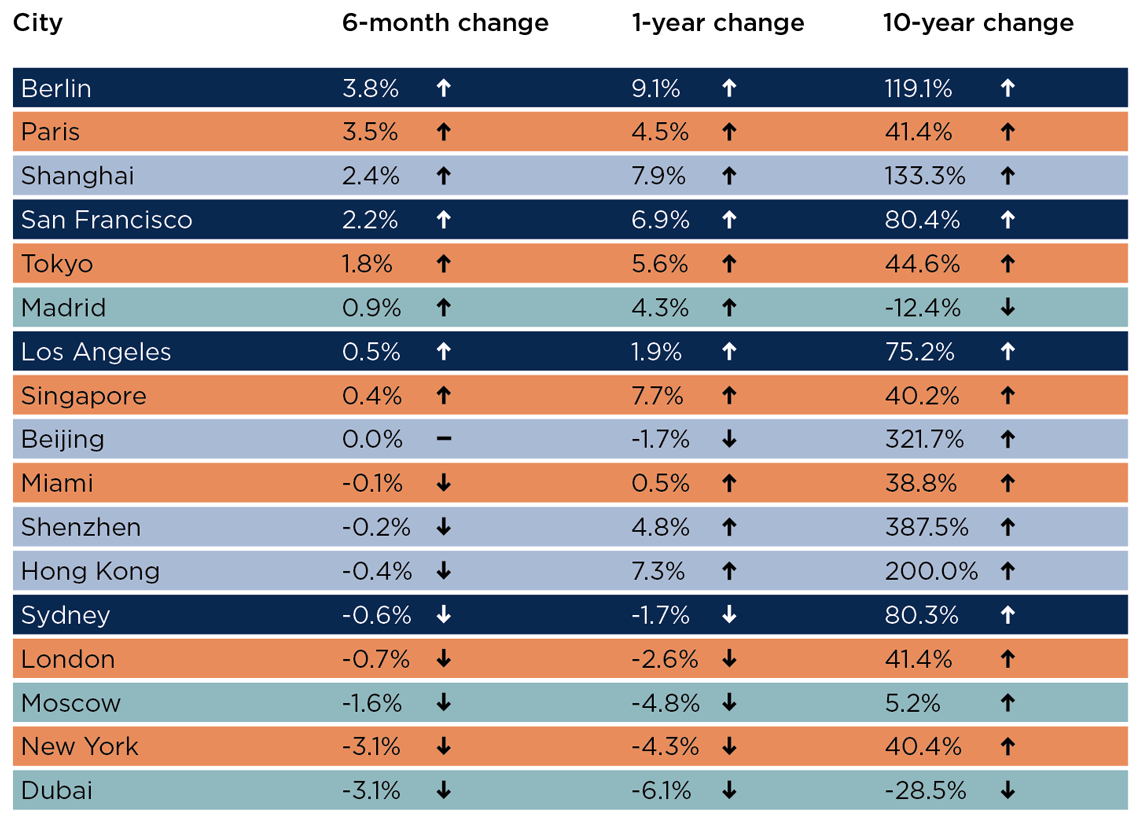 Disruptive forces are at work in prime residential markets around the world, creating local and regional divergence against a backdrop of slowing global economies. From growing wealth generation and the evolving needs and preferences of prime buyers, to market-cooling measures and political uncertainty, a variety of factors are impacting values, in different ways in different locations.

Focusing on prime residential real estate (typically, properties in the top 5% of the market by price), all the cities in the Index have active and growing prime residential markets that attract international investors and occupiers. Overall, the Index reflects a slowing of prime residential price growth globally, as many markets enter a new stage of the cycle. Combined growth across all cities was 2.3% in 2018, and just 0.3% in the second half of the year – the lowest since mid-2009. Seven cities experienced falls in price growth in the last six months of 2018.

Two Asian cities sit at the top of the Index. Hong Kong has the most expensive prime residential city property in the world. With an average value of $4,670 per sq ft, it is 56% more expensive than its next rival, Tokyo. Despite overall price growth of 7.3% in Hong Kong in 2018, there was a dramatic slowdown to almost zero in the second half of the year, the result of a stumbling stock market and potential weakness in both the local economy and that of mainland China. While there have been several major deals that have continued to grab the headlines, both townhouse and luxury apartment price growth has flattened.

Dubai experienced the largest fall in prime residential prices in 2018, with a 6.1% drop to $730 per sq ft. Here, the market has failed to bounce back from its decline, coinciding with a fall in oil prices and high stock levels.

We have also seen how Chinese buyers are seeking to diversify. As well as the top-tier cities, they are increasing their presence in continental Europe. In part, this is driven by a recovering economy and better availability of large new-build projects in key European cities.

Politics and policies
The effects of market-cooling tax regimes are being felt in many world cities, affecting capital value growth, as the Influence of Tax chart shows.

The influence of tax and politics on capital growth

“In London, higher rates of stamp duty were introduced in December 2014, there has been an additional tax of 3% for second homes, plus changes to capital gains and inheritance taxes,” says Lucian Cook, Head of UK Residential Research at Savills.

“But the gradual price decline since 2014 has been less about changes to property taxes and more about political uncertainty, such as the 2015 general election and the EU referendum in 2016.”

In mid-2016, Sydney introduced a 4% surcharge purchaser duty for foreign buyers, doubling it to 8% just a year later when the market failed to show any signs of slowing down. From late 2017, prices for prime residential did start to fall. This was in line with the wider mainstream market, which has also slowed through affordability issues for buyers and tighter lending policies.

The Singapore Government was keen to slow price growth, introducing a 10% additional buyer’s stamp duty (ABSD) for non-Singaporeans in late 2011. This was later increased to 15% in 2013 as it had not had the desired effect of slowing prices. The market had a gradual price decline for around four years, but picked up in late 2016. As growth accelerated in early 2018, the ABSD was raised again to 20%.

Looking ahead
Despite forecasts that show global economic growth will slow modestly, demand for prime residential real estate is expected to continue to be supported by a growing population of HNWIs. Locations that are considered a safe haven to store wealth and offer a secure income stream are forecast to be top of buyers’ lists, with mainland Europe poised to benefit from its ability to offer lower entry prices and greater potential for growth.

The US prime residential market is likely to continue to slow after eight years of sustained growth, as interest rate rises impact purchaser activity, and major markets such as New York and Miami grapple with high supply of new stock. While the prime markets in some of the most internationally invested cities have largely taken cooling measures in their stride, slowing growth means further taxes on overseas buyers are less likely in the near term.

The bigger picture
Looking back at the prime residential markets over the past 10 years, it is the rise of Asian cities that is the standout trend. There has been astonishing growth from China’s Rising Stars, which have shown a price increase of more than 125% in 10 years. For Hong Kong, this reflects its appeal as a world-class city with strong economic performance. Others, such as Shanghai and Shenzhen, are seeing strong growth off a low base and the impact of rising middle-class wealth, as well as an affinity for investing in real estate.

Behind these are the Tech Disruptors, a group of four cities that have achieved more than 75% growth, as their tech reputations are cemented. Los Angeles has a lower average cost at $1,410 per sq ft, while San Francisco is $1,630 per sq ft.

Coming next, with around 40% growth, are the Global Leaders, a group of cities with strong track records for luxury residential. The cheapest of these is Miami at $1,020 per sq ft, while the most expensive is Tokyo at $3,000 per sq ft.

This leaves the Slow Burners, three cities that have had growth of less than 10%. For Madrid ($730 per sq ft) this has been caused by high levels of distress and supply in the residential market following the global financial crisis. Moscow and Dubai, with average prices of $1,250 and $730 per sq ft respectively, have been dogged by political uncertainty and lower oil prices.