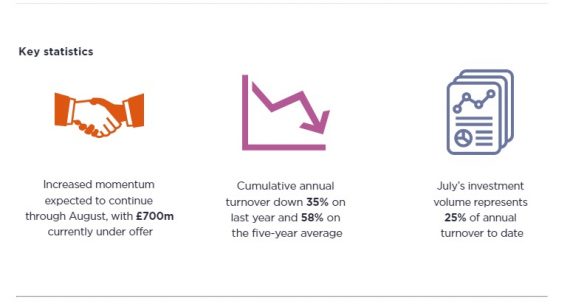 In a sign of growing market momentum, July’s investment volume reached £411m across eight transactions; this represents 25% of annual turnover to date, and exceeds the combined volume of the previous four Lockdown months.

This brings cumulative annual turnover to £1.66bn across 54 transactions; whilst this is a higher transaction number than during the same period last year, it is 35% lower in terms of volume and reflects a 58% decrease on the five-year average.

July turnover as a percentage of annual turnover 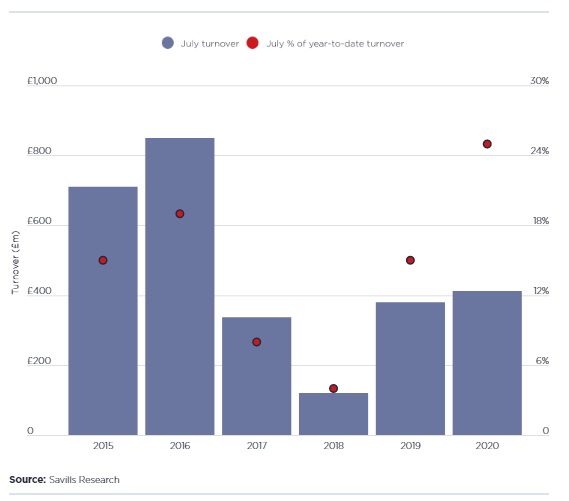 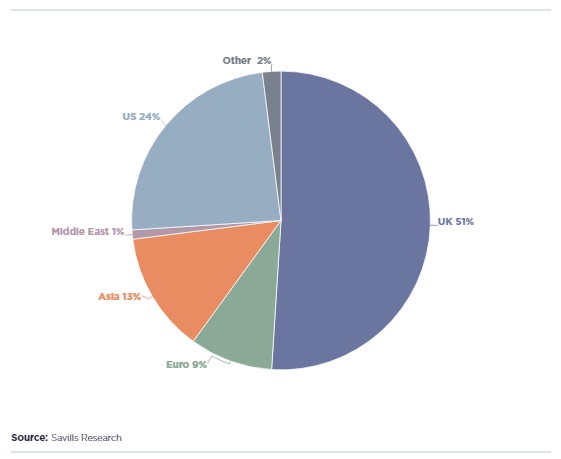 The most significant transaction to exchange (and the first £100m+ deal since February) was 1 New Oxford Street, WC1, which was acquired from Nuveen / BA Pension Fund by Singaporean new entrant, Sun Venture, advised by Savills.

Other key transactions during the month included 8–9 Stratton Street, W1, which was acquired for owner occupation by the National Bank of Egypt for £36m (£2,179 per sq ft), having been openly marketed in January for £33m, and 91 Dean Street, W1, which Savills sold to a confidential UK Property Company on behalf of the owner occupier, SoHostel, for ahead of the guide price of £30m.

Interestingly the strong pricing levels achieved in each of these transactions do not imply any discount to pre-Covid levels; if anything, they reinforce the notion that in times of heightened uncertainty, investors value property as a physical commodity and for its relative yield, provided it is of sufficient quality or offers secure income. 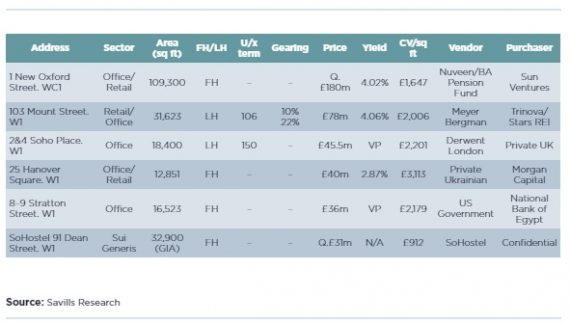 We are tracking over £700m of stock under offer and expect a relative glut of assets to be marketed in the coming weeks, both by opportunistic vendors and by those who would have otherwise done so earlier in the year had it not been for the lockdown period. Many others, however, are still maintaining a watching brief on activity before making sales decisions.

One notable development to emerge this month is the Government’s proposal to put all commercial uses into one all-encompassing group – ‘Class E’. We are still digesting the full implications of this relaxation, but the flexibility it affords to landlords should enable them to find the most efficient occupier mix for their asset, without needing consent to do so.

We expect July’s momentum to be sustained throughout the typically quieter month of August, and for pricing to remain accordingly robust for core, well located assets. On the basis of the evidence seen this month, Savills prime West End yield remains at 3.75%.

The MSCI prime and equivalent yields stand at 3.71% and 4.85% respectively. 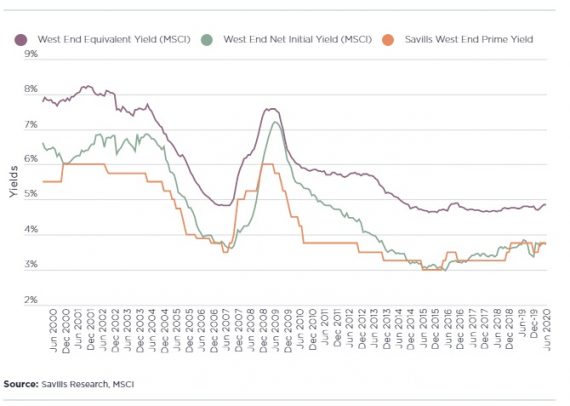