<<   Back
Record Setting 22 Percent of all Millennials in U.S. Still Live with Mom

Based on new research by Zillow, more people age 23-37 are living with their moms in the U.S. than at any time this century. Nearly 22% of American millennials – more than 14 million in total – live with their mom or both parents, the highest share for this age group since at least 2000.

While the economy has recovered since the housing bust and recession of the mid-2000s, young people living with their moms has continued to rise. The share of those living at home that are unemployed has fallen to 10.3% from 19.5% in 2010, indicating that more young people are struggling to afford independent housing even while holding a job.

“While it might be tempting to stereotype these young adults as lazy millennials bumming off of mom, the data paints a different picture,” said Zillow Senior Economist Sarah Mikhitarian. “When the housing market went bust and the economy unraveled into a recession, young adults increasingly returned to their childhood home. And, despite a strong labor market and fairly robust economic recovery, this trend has continued in the face of rising housing costs and deteriorating affordability. Living with mom as an adult can certainly bring its share of headaches, but the benefits go beyond the occasional home-cooked meal – living under mom’s roof can allow young adults to save enough money for a down payment, security deposit or some other big expense. Not to mention you won’t have to travel far to take your mom out to dinner this Mother’s Day.”

Rents are on the rise, bringing present-day affordability challenges for those looking to rent and long-term difficulties in saving for a down payment on a first home. Recent Zillow research found today’s renters need an extra year and a half to save for a down payment than their parents’ generation 30 years earlier. 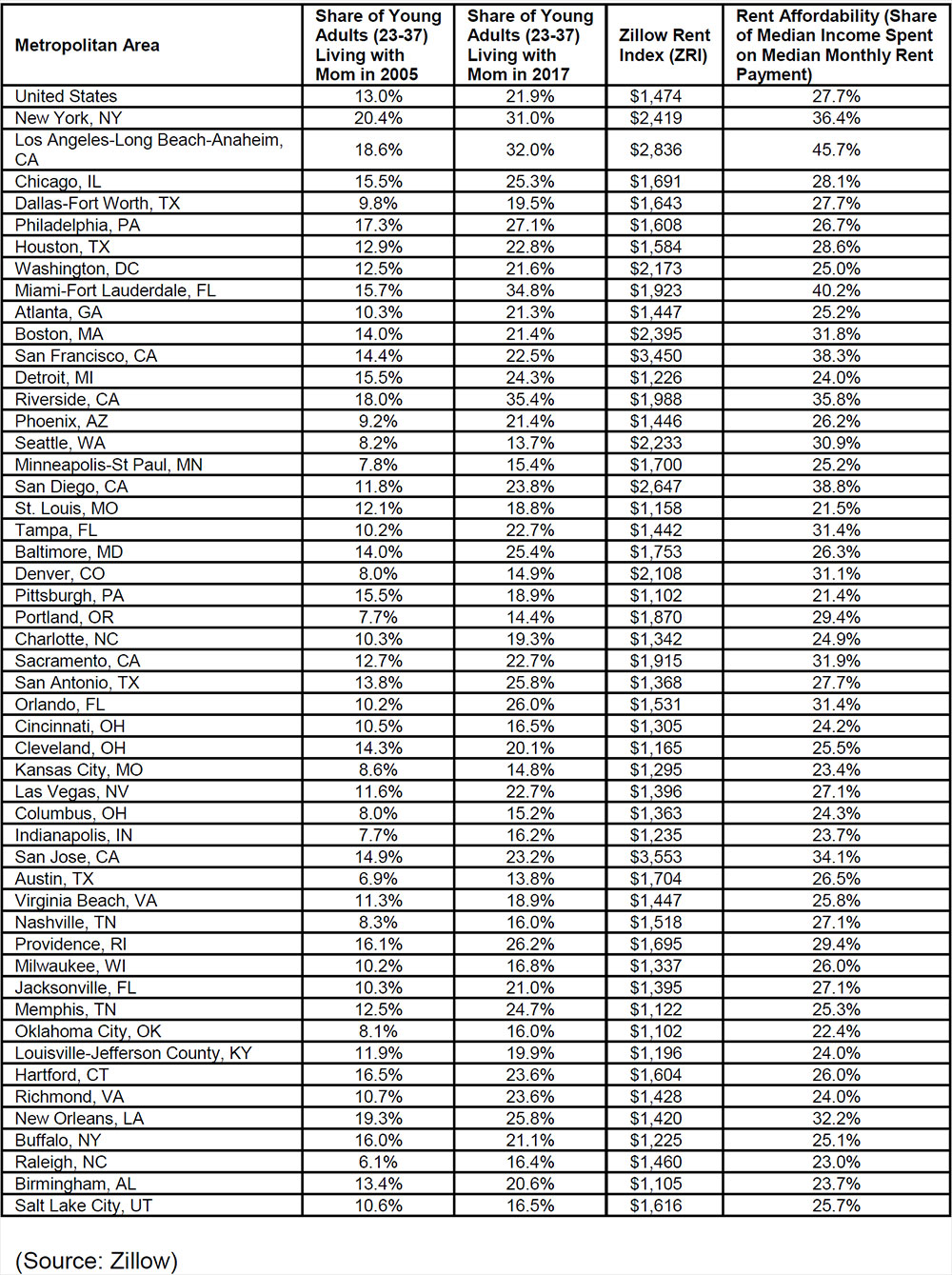 Those that choose to live with their moms and build up their savings may have a leg up. An analysis from HotPads®, a Zillow Group-owned apartment- and home-search platform, showed that living rent-free with parents can allow you to afford a down payment on a home nearly three years sooner. And a small share of this young adult population is actually hosting mom in their own home – perhaps to take care of her as she ages or to have help raising children of their own.

Among large housing markets, Riverside, Miami, Los Angeles and New York have the highest share of millennials living with their moms – at least 31%. These four metros are all among the seven least affordable rental markets in the country.

Millennials in Seattle, Austin, Portland, Kansas City and Denver will likely need to travel to visit their moms on Mother’s Day. The smallest share of young adults live with mom in these markets, below 15% in each case. In these booming, expensive markets, it’s likely that fewer young adults live with mom because family is far away rather than because rents are more affordable.

The median monthly rent price in the U.S. is $1,474, up 2.5% from a year earlier, according to the Zillow Rent Index. Zillow predicts rents will rise an additional 1.8% in the coming year and reach the $1,500 threshold.