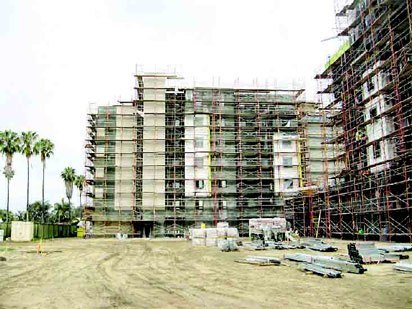 While Nigeria is grappling with the ‘headache’ of huge housing deficit, fresh facts have emerged as to the reason the deficit has continued to increase.

Specifically, hundreds of housing projects across the country which started several years ago, have been abandoned at various stages of completion.

Most of  these abandoned housing projects, according to our investigation, were  sponsored by the Federal Mortgage Bank of Nigeria, FMBN, through its Estate Development Loan, EDL, window to developers since 2010.

The housing estates are located in some of the state capitals such as Akure, Bauchi, Jos, Oshogbo, Owerri, Uyo, Markurdi and Edo among others.

While majority of the  partially completed abandoned housing estates have been overgrown with weeds, others that are  at different stages of development have been neglected by their developers without any respite.

From investigation, reasons such as legal impediments,  fund diversions, delay in disbursement of funds by FMBN, high prices of building materials, high interest rate on loan, corruption and poor locations, and uncleared exit strategy for some developers  from the off-takers’ angle, were adduced  by developers for the abandonment of the housing  projects.

A source from the Federal Mortgage Bank of Nigeria said  that loan default by developers and the Primary Mortgage Institutions, PMIs, led to the suspension of  Estate Development Loan, EDL, hence the abandonment of the housing projects.

The source said that loan defaults by developers and mortgage bankers, amounted to over N100 billion, which the bank has not recovered.

Worried by the long abandonment of the projects, Chief Executive Officer of Fesadeb Communication and Promoter of Abuja International Housing Show, Mr. Festus Adebayo, raised the alarm  that some of the EDL-sponsored projects of FMBN  have been abandoned in many states without completion.

He wondered why  the Federal Ministry of Power, Works and Housing, FMPWH, could start fresh construction of housing estates, while many uncompleted residential units are wasting away.

He said: “Some EDL-sponsored projects of FMBN  in many states  are uncompleted. Why can’t  the ministry synergise with those developers instead of starting fresh construction of houses under the National Housing Programme?”

According to him, fund diversion accounts for less than 12 per cent of the challenge. He said: “In 2010, REDAN/FMBN sat and reviewed the  issues pertaining to challenges of EDL.  The outcome will surprise you. The same challenge is what is hindering efforts by public developers since then. The production costs of the public developers are far higher than that of the private developers because of ‘interests’.”

The REDAN boss noted that since 2013 when EDL was suspended, and since 2016 when public developers started developing estates,  only few estates have been built. He mentioned that the 200 units of houses built in Bauchi are still wasting, calling for the need for all stakeholders to deal collectively with  the systemic issues, define the transaction dynamics,  develop a proper interface and exit strategy for the sector to thrive.

According to  participants from 53 countries of the world at the 8th Global Housing Finance Conference, Chime stated that they identified that  most important impediments to increasing affordable housing supply through PPP  included inadequate or absent legal or regulatory framework, which represent 29 per cent; lack of political will – 24 per cent;  no financing available to developers- 19 per cent; public sector unwilling to partner with private sector- 14 per cent and private sector capability but is unwillling to partner with public sector- 10 per cent.

Another developer who identified himself simply as “Pastor Joshua said:  “There were  hundreds of unoccupied completed and partly completed affordable housing units nationwide, yet, the nation has 17 million housing deficit.

“One of our firms built and commissioned 228 units in Bauchi Unity Estate Phase 1 with infrastructure, and the state government has been struggling till date to play its role in the PPP arrangement to allow mortgages through several Primary Mortgage Banks, PMBs, which pulled out of the deal due to the weak ‘pocket capacity’ of Bauchi State’s civil servants.”

He advised that the Minister of Power, Works and Housing, Mr. Babatunde  Fashola, should be invited to resolve the cases, tasking developers and all advocates of affordable housing on the need to unite and push for bailout funds for the sector.

Another concerned stakeholder, Abel Owotemu, said that the abandoned housing projects would help to reduce deficit if the legal impediments and EFCC related issues around them are resolved.