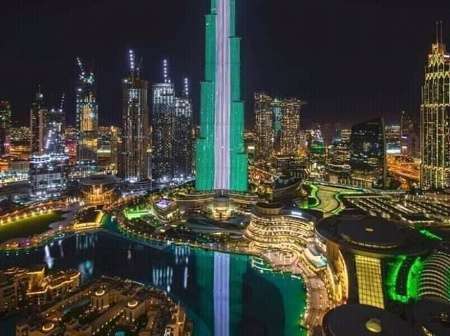 UAE’s Burj Khalifa which is the Tallest building structure in the world, lit up in celebration of Nigeria’s 60th independence recently, and it has got lots of people talking.

The Burj Khalifa –which is known to be the tallest building in the world – lit up recently night with an image of the Nigerian flag depicting the colors Green white and green which suggest that the United Arab Emirates stands in solidarity with Nigeria as she celebrates sixty years of fruitful independence.

Since a photo of the gesture by the UAE officials surfaced online it has triggered many Nigerians to several mixed emotions. As many people took to popular social media platform, Facebook to share their thoughts as to what could warrant such attention From the United Arab Emirates.

Despite the many travails we face as a country it is the little things such as this that makes us feel proud to be Nigerians, knowing the the World acknowledges us in a positive manner.

It is indeed a good time to be alive and a proud feeling to be called a Nigerian.