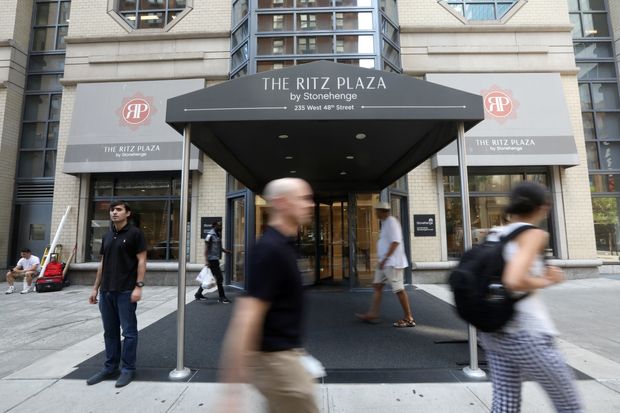 A strong appetite among foreign investors for office buildings, apartments, malls and other real estate has in part fueled the long-running bull market in U.S. commercial property.

Now, amid a maturing property market cycle and rising uncertainties in geopolitics and the global economy, foreign investors have sold more U.S. commercial real estate than they bought in a quarter for the first time since 2013.

After years of amassing huge portfolios, investors from abroad sold $13.4 billion worth of property in the second quarter of 2019, according to data firm Real Capital Analytics. During the quarter, foreign investors purchased $12.6 billion of real estate.

European and Canadian investors have been active sellers recently, along with some high-profile investors from China. “U.S. real estate is priced very high right now, and people think we’re close to the top of the market,” said Matt Posthuma, a partner in Ropes & Gray’s asset management practice.

The waning appetite of foreign investors for U.S. property contrasts with their intensifying interest in other asset classes. Foreign money managers still see U.S. assets as a haven and have been piling into U.S. stocks and bonds, buying nearly $64 billion in these assets in June, the largest sum since August 2018, according to data from the Treasury Department.

What’s the difference? Compared with buildings, stocks and bonds are easier to buy and sell. If a recession hits, property owners may find it more difficult to sell their assets.

“For someone looking out three to five years, their investments may not be worth as much as they are today,” Mr. Posthuma said. “That’s the fear.”

Some domestic investors in commercial property also are moving to the sidelines. Overall, sales volume of commercial U.S. property fell 9% in the first quarter of this year from one year ago and rose a modest 2% in the second quarter to $127 billion.

For decades, sovereign-wealth funds, insurers, pension funds and family offices across the world have sought assets in the U.S. to diversify their investments and seek steady returns. Many also are drawn to the market’s relative stability, vast pool of consumers and deep and liquid market.

But, with the dollar strong, overseas investors unloading U.S. assets can chalk up foreign-exchange gains against weaker local currencies along with profits from higher prices. The strong dollar also means buying U.S. property has become more expensive for them. Some investors are shunning investments in flood-prone areas, as rising sea levels and hurricanes amplify costs to mitigate damages, particularly in older buildings.

Finding good deals also has become trickier in the U.S. as a possible recession looms and other regional and economic trends — including the impact of e-commerce on the retail sector — cast a shadow over some property types.

One of the biggest foreign sellers during the second quarter was Ivanhoé Cambridge, the real-estate arm of Canadian pension fund Caisse de dépôt et placement du Québec, which completed the sale of $2.2 billion worth of properties, according to Real Capital.

In the second quarter, Ivanhoé Cambridge sold two office towers in Seattle and its stake in Ritz Plaza, a 479-unit rental apartment building in Midtown Manhattan.

“It’s investment discipline,” said Sylvain Fortier, chief investment and innovation officer at Ivanhoé Cambridge. “When you reached the level you set out at the beginning, don’t get greedy. Get out and recycle your money into something else.”

The Quebec pension fund is focusing more these days on industrial real estate and less on other property types. Late last year, Ivanhoé Cambridge invested in IDI Logistics, an Atlanta-based developer and operator of warehouses.

In another megadeal in June, Singapore-based investment manager GLP agreed to sell a U.S. network of industrial warehouses, totaling 179 million square feet, to Blackstone Group LP for $18.7 billion, the largest private real-estate transaction ever. GLP has said it would keep a small footprint in the U.S. and is still looking to expand but didn’t provide a timeline.

They are choosing to invest in debt rather than equity, which is seen as a safer bet, if the economy slides closer to a recession. They are also taking on more minority stakes to lower the chances of triggering a review by the Committee on Foreign Investment in the U.S., the country’s national-security panel that vets foreign investment in U.S. businesses.

Last year, Congress expanded the authority of the panel, known as Cfius, which has hindered some real-estate transactions if they include land located near a military installation or other sensitive U.S. government property.