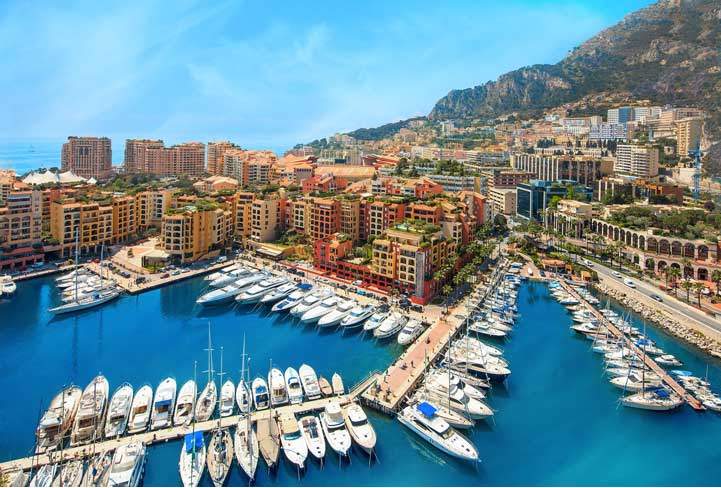 with demand for real estate of all types remaining high

The exclusivity of Monaco is unparalleled. One of the smallest states on earth, only Vatican City is smaller by area, Monaco is home to more millionaires as a proportion of population than any other country, according to a report from WealthInsight.

Celebrities, titans of industry, aristocrats, and other global elites call the Principality home. Monaco’s appeal is far-reaching. Fine dining, luxury shopping, a sporting calendar which seems tailor-made for the global elite, an attractive fiscal regime for residents, its location on the Mediterranean, and history, all contribute to its international standing.

These factors mean that demand for real estate of all types is high, despite the recent Covid-19 pandemic. The residential property market remains the most expensive in the world and supply of new property is scarce. There are a number of new developments in the pipeline, such as the ambitious land reclamation project, Portier Cove, although these schemes are only expected to make a dent in the supply shortage.

Only values in Hong Kong come close to competing for the title of most expensive real estate. Monaco and Hong Kong are both severely constrained by available space and bolstered by their global reputations. Prime property in New York costs half as much as Monaco, while London and Paris cost 60% and 68% less respectively.

As one of the least affected parts of Europe, Monaco was able to ‘flatten the curve’ of Covid-19 infections successfully within the Principality. A robust health system, public co-operation and strict lockdowns were critical to the success of Monaco’s response to the pandemic.

While the economic impact of the virus is still largely unknown, the residential market in Monaco is well placed to weather the storm of any economic downturn. We expect prices to remain flat for a period or potentially even see very small increases as the lack of supply and consistent demand prevents prices from falling. However, we do expect resale transactions to slow as the world pauses to assess the situation.

This is similar to what happened following the Global Financial Crisis. Prices per square metre declined by 13% in 2009 compared to the year prior, but a year later they had returned to pre-recession levels. However, transaction volumes took three years to recover to 2007 levels.

The average sale price in Monaco in 2019 was €48,151 per square metre, 1.3% below the value recorded in 2018. This small fall follows prices seeing an exceptional rise of 18.1% the previous year as prices reached a high plateau.

Transaction volumes fell by 12% in 2019 versus 2018, driven by an 18% decline in sales of properties priced under €5m. This decline was caused by a drop in the number of one- and two-bedroom properties available for sale in comparison to 2018.

The small price fall is in line with the prime residential market across many global cities. The Savills Prime Index: World Cities monitors 28 cities around the world, recorded a fall of 0.1% over 2019, driven partly by global economic uncertainty.

However, since 2015, price increases in Monaco have exceeded those in the index, increasing 34% compared to 17% across global cities. This demonstrates the resilience of the housing market in Monaco and its appeal as a stable location in which to purchase property.

Transaction volumes across the Principality fell from 523 transactions in 2018 to 462 in 2019. Due to a lack of new build supply, the number of new build transactions fell 54%, significantly contributing to the overall decline in sales numbers. Transactions of re-sale properties also saw a small fall as fewer properties were brought to the market. There was one segment of the market that bucked this trend: sales of properties above €10m increased by 64% in 2019 compared to 2018.

This increase in the number of high-value property sales has been partly driven by an uptick in the volume of villas being sold, often for redevelopment, and Monaco’s continued status as a premier location to live and invest.

Demand for larger properties is also being driven by the increased scrutiny from the Monegasque government of buyers claiming residency to ensure that the property being purchased meets the needs of the entire family. This trend is anticipated to continue after the Covid-19 pandemic has passed as families prioritise space.

The Principality is severely land constrained resulting in few new developments. 2017 and 2018 were outliers for their comparatively high number of new build properties for sale. 2019, by comparison, saw only nine properties intended for the sales market completed and the majority of new build sales were off -plan.

The pipeline of new build developments features 45 rue Grimaldi, Testimonio II, and Tour des Giroflées. These are medium size developments which, while adding supply, will not be enough to address the supply and demand imbalance.

Looking further ahead, Portier Cove, the highly anticipated development being built on six hectares of reclaimed land, will feature 120 new apartments, villas, and houses and is due for completion in 2025.

Over the year to February 2020, rental values in Monaco increased 20% across all property types. This was driven by a large increase in the rental values of 4+ bedroom properties, such as One Monte Carlo, a tower of luxury apartments for rent across from the Casino de Monte Carlo, which was delivered in 2019.

The high demand and corresponding rental growth of larger properties is also due to the need for renters to demonstrate that their property accommodates their needs in order to apply for a residence permit, similar to the sales market.

Monaco punches well above its weight on the world stage with a profile in line with top-tier global cities. The diverse demand base means the Principality will remain a sought-after destination. Additionally, Monaco has proved to be relatively immune to political and economic instability, especially in light of Covid-19, and this resilience is forecast to continue to attract buyers and renters.

The global reputation of Monaco ensures that demand levels across the Principality outstrip supply in this space-constrained location. Going forward, though there are new developments in the pipeline, the promised new units are fewer than needed. These dynamics mean that prices, although the highest in the world, are expected to remain stable.

As more towers are built across Monaco, properties which once had a sea view might be obstructed in the future. To counteract this, developers are prioritising amenities like pools, gyms, cinemas, spas, and parking garages.

The outlook for the rental market is likely to be dependent on property size, as seen in 2019. As the Monegasque government examines residency applications more closely, it could become more difficult for couples and individuals to obtain residency through renting a smaller property, causing potential rental decreases for those sizes. However, we expect demand and rental values for larger properties to continue to increase.

How cities mobilized to convert spaces into COVID-19 care facilities »