<<   Back
Interesting Facts about Concrete and Cement

Concrete is one of the world’s most useful materials. Since concrete can be poured into place as a liquid, but hardens to resemble a material like natural rock, it makes a perfect building material. In fact, concrete is the most used material in the world, in terms of volume. Find below more facts about concrete including the history of how concrete was discovered and some of the ways concrete is used throughout the world. 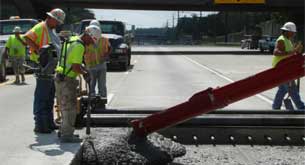 Concrete is an excellent material for roads. It has high compressive strength and can be poured to match the shape of the road.

History of Cement and Concrete

The ancient Romans were the first to develop concrete as a building material. Roman builders mixed lime, water and volcanic ash from Mount Vesuvius and called the concrete “pozzolana”.
The Romans built the Pantheon using concrete. The dome on the Pantheon is still the world’s largest unreinforced concrete dome.
In 1796 the English discovered a natural deposit of cement rock. They understood its value and soon quarried the material and sold it as Roman Cement.
More natural deposits of cement material was found around Europe and other areas in the world. This material was very helpful for local builders, but for those not close to one of these natural deposits, cement was not available.
In 1874 an English man who worked as a bricklayer tried to make his own cement. After many trials and errors, he finally developed a manufactured cement for which he received a patent. Joseph made the cement by first pulverizing limestone and clay and then burning the mixture. He then ground the burned mixture into a ultra fine powder. He named the powder Portland Cement because the color was similar to quarried stone from the Isle of Portland off the English coast.
Facts about Concrete

By volume, a concrete mixture typically includes 60 to 75 percent aggregate (gravel and sand), 15 to 20 percent water, 10 to 15 percent cement, and 5 to 8 percent of air.
The main ingredient in Portland Cement is lime. Lime is made from limestone, natural chalk or sea shells by burning off the carbon dioxide with air between 1100° and 1200° C. Lime is quite plentiful because of how much limestone that is available near the Earth’s surface.
Concrete is a very popular material because the aggregate and water are usually available everywhere. The only material that requires transportation is cement which is a fairly small amount of the total material used.
Concrete has a high compressive strength. Strengths up to 20,000 psi is possible, but strength from 3000 to 7000 psi are more economical and more commonly used.
Tensile strength (strength when the material is pulled) of concrete is only about 8% to 15% of its compressive strength.
Reinforcing steel must be used when tensile strength is needed in concrete.
Reinforced concrete has high resistance to fire and water. Concrete is one of the only materials used for underwater structures such as dams and submerged bridge piers.
Reinforced concrete structures are rigid, typically more rigid than steel frame structures.
Concrete is easily shaped. Curved pieces or ornamental pieces are possible because concrete is poured and cast.
Concrete is one of the only materials that is economical for building footings, basement walls and piers.
Facts about Use of Concrete

In transportation concrete is used for bridges, bridge decks, retaining walls, sidewalks, crash walls, curb, and roads.
Almost all bridge in highway transportation use concrete decks, even if the bridges use steel beams, because the concrete decks are cheaper and easier to maintain.
There are many types of concrete structures used for bridges. Prestressed concrete girder, concrete box girder, concrete slab, coffered slab, concrete rigid frame, concrete strut frame and concrete arch are all concrete structural design choices for bridges.
Very long spans are possible with some concrete beam designs. A 1082 foot (330 meter) span was built for the Shibanpo bridge in China using concrete box girders.
Concrete is also used for high-rise buildings. The Trump International Hotel and Tower is the largest concrete structure in the world. This 98 story building is over 1387 feet (423 meters) tall.