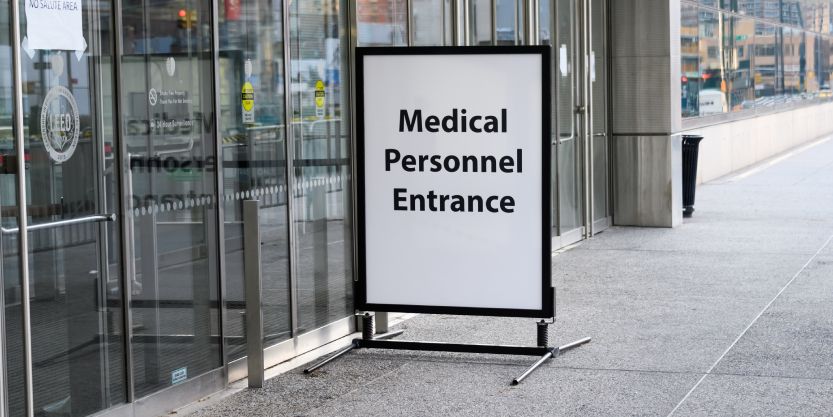 While the need for more hospital beds has slowed, cities are now better prepared for a potential second wave of coronavirus

When the coronavirus became a pandemic, one thing seemed certain: Hospitals would be taxed to meet the capacity for demand worldwide.

As inpatient admissions escalated, hospitals converted alternative spaces, like decommissioned medical facilities and convention centers, to accommodate patients without life-threatening conditions, behavioral care, clinical staff and excess equipment. While the demand for more hospital beds has slowed in many areas, if there is a second wave of the virus, some organizations and cities are better equipped and prepared to convert the necessary space.

“Based on the data we were receiving in March, we had every reason to believe that health care systems would be overwhelmed by hospitalizations due to COVID-19,” says Jay Johnson, Managing Director, JLL Healthcare, who is based in Atlanta. “There was a strong emphasis on having additional sites in place, ready to handle patient overflow. Many sites are now closing due to the positive impact of social distancing, but we’ve definitely learned lessons that can be applied if virus spreads again in the future.”

An obvious target for conversion into coronavirus facilities? Old hospitals not currently in use.

In the city of Chicago, several public and private entities came together to convert two former hospitals and one former medical office building into up-and-running care sites in just a matter of weeks. General contractors ran crews 24 hours a day, seven days a week, with all involved wearing masks and practicing social distancing.

These types of operations require holistic planning on every level, says George Mills, Director of Technical Operations, Healthcare Solutions, who is based in Chicago.

“You have contaminated patients coming into one area and you have other patients who are getting ready to be discharged,” he says. “A big part of the thought process behind these conversions was restricting travel paths to minimize points of conflict and eliminate the need for staff to make decisions on who goes where.”

The former hospital sites — Metro South Hospital in Blue Island and Westlake Community Hospital in Melrose Park — had been shuttered. Over the last month and a half, the Army Corps of Engineers and crews from both Clark Construction and Bulley & Andrews ripped up carpet and laid down floors, tore down walls, built bays, and built new air pressure circulation systems.

In March, as New York City became the epicenter of the virus in the U.S., local officials teamed up with the Army Corps of Engineers and the National Guard to turn the Jacob K. Javits Convention Center into a temporary medical facility. During the month of April, which saw the city’s largest number of cases, the Javits Center treated more than 1,000 patients.

As of May 1, the center was closed and the last of the patients there released. However, equipment and supplies will remain in case it needs to reopen due to a second spike of the virus.

In the U.K., a university exhibition and conference center in Bristol was converted into a critical-care, 300-bed hospital.

In Chicago, crews mobilized to do a similar conversion at McCormick Place, the city’s largest convention center — in just two weeks. There, the plan was to erect a temporary hospital that could house up to 3,000 beds. At the time, Illinois’ Governor J.B. Pritzker said the best case scenario would be that the facility was not needed, because that would mean the state had flattened the curve and fewer people than feared got sick. A large portion of the facility has since been dismantled as the curve flattened, although the unit holding negative pressure tents will remain in case they are needed once elective surgeries resume in hospitals.

Meredith O’Connor, JLL’s Executive Managing Director, Brokerage, who led a team that brought the facilities management solution to life in less than two weeks says the playbook they’ve developed will be invaluable in the future.

“People don’t realize how many different things go into the successful operation of a satellite facility like that,” she says. “It’s critical to first assess and forecast patient load under a variety of spread scenarios. Logistics management also is key to engineering these large-scale conversions.”

Officials and hospitals have also had to think outside the box to serve dire medical needs.

In Wuhan, China, where the outbreak began, officials built 16 temporary hospitals out of sports stadiums, gymnasiums, and exhibition centers. They closed back down on March 10, showing the flexibility of fast-care solutions.

When faced with a soaring numbers of patients in Italy, an international network of architects and engineers came together to convert 20-foot-long shipping containers into two-bed units for a hospital in Milan. Dubbed CURA (Connected Units for Respiratory Ailments), each container has all the features of an ICU plus extractors to create negative air pressure.

In order for projects like these to be successful, the roles of everyone involved must be well-defined and properly planned to effectively integrate into the overall effort, says Roger Herritz, National Healthcare Lead, Projects and Development Services, JLL, who is based in San Francisco.

“Success in responding to this pandemic is all about teamwork,” he says. “For the projects in the U.S., FEMA was the funding source and the Army Corps of Engineers was the project manager.”

What’s next
Some models suggest that relaxing social distancing could spark another wave that could trigger public health crises in various cities all over again.

While places like New York and Chicago have started winding down their temporary medical facilities, the future of coronavirus is unknown. Local and regional governments all over the world have vowed to remain diligent about responding to subsequent spikes.

It’s important for healthcare service providers and local governments to “retain the capability to rapidly scale up care sites if a future infection wave comes, especially if it’s more severe than the initial outbreak,” Johnson says.

It’s also critical to plan for the future dissolution of any temporary space, Johnson says. For example, all spaces will need to be cleaned and disinfected properly before they are returned to their original uses.

“By working to carve out new care, housing, and storage spaces in a variety of buildings, we can help reopen local economies with informed, thoughtful strategies,” he says. “We have risen to the challenge once, and we can undoubtedly rise to the challenge again.”