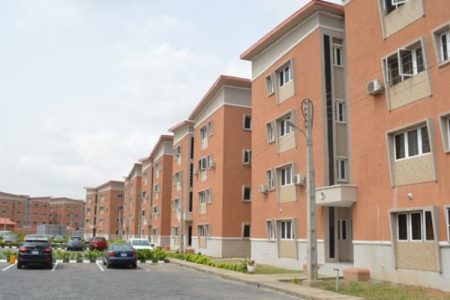 Despite numerous intervention programmes or schemes initiated by the government in the housing sector, house price and rent remain high, making the country rank among the most expensive housing markets in the world with a very active rental market.

There are obvious supply issues amid surging demand. The gap is so wide that a sizeable number of the country’s population struggle for space in the housing market.

Besides the Federal Mortgage Bank of Nigeria (FMBN) and the accompanying National Housing Fund (NHF) which were aimed to make housing finance accessible and affordable to low-income earners at 6 percent interest rate, other interventions have come on stream.

These include the Nigerian Mortgage Refinance Company (NMRC), Federal Integrated Staff Housing (FISH), Family Homes Funds (FHF) among others. All these have failed to translate to increased housing stock and affordability in the country.

The implication is that the country’s housing deficit which, by 2016 World Bank report, was estimated at 17 million units keeps expanding as supply falls far short of demand.

The country’s housing deficit, according to Roland Igbinoba, CEO, Pison Housing Company, is both quantitative and qualitative, explaining that besides the insufficient stock, some of the houses available are in sub-standard condition.

This explains why, in the country’s urban centres, the number of slum dwellers is on the rise with the attendant over-crowding which exposes them to health risks such as diarrhoea, diabetes, hypertension, and other diseases. This also affects productivity in workplaces.

This huge number, according to the report, spends about 50 percent of their income on house rent. This means that other household needs such as feeding, children’s school fees and health suffer as a result.

In Nigeria, the government schemes are supposed to take care of these high prices and rents, ultimately reducing un-affordability and increasing access to housing by low-income earners.

NMRC, for instance, was set up as a private sector-driven company with the public purpose of bridging the funding cost of residential mortgages and promoting the availability and affordability of good housing to working Nigerians.

This, it is expected to do by providing mortgage lending banks, especially the primary mortgage banks (PMBs), with increased access to liquidity and longer terms funds in the mortgage market. Though the company has done well in many areas, its best is still considered not good enough for the sector.

The Family Homes Funds (FHFL) has a commitment to put 500,000 families in homes by 2024 and in the process, create 1,500,000 jobs. It prides itself as the largest housing fund in Sub-Saharan Africa that is out to create jobs, invest in social housing for Nigerians, and build sustainable communities.

But it remains to be seen the number of jobs it has created, how many Nigerians now own their own homes because of the fund and how many sustainable communities that have been built.