<<   Back
Home Equity Continues to Rise Across America in Q3, Despite Coronavirus

Based on ATTOM Data Solutions latest third-quarter 2020 U.S. Home Equity & Underwater Report, 16.7 million residential properties in the United States were considered equity-rich, meaning that the combined estimated amount of loans secured by those properties was 50 percent or less of their estimated market value.

The report also shows that just 3.5 million, or one in 17, mortgaged homes in the third quarter of 2020 were considered seriously underwater, with a combined estimated balance of loans secured by the property of at least 25 percent more than the property’s estimated market value. That figure represents 6 percent of all U.S. properties with a mortgage, down from 6.2 percent in the prior quarter, 6.6 percent in the first quarter of 2020 and 6.5 percent a year ago.

Equity improved in the third quarter as the housing market around most of the country continued averting the slowdowns hampering other major sectors of the American economy during a time when the nation battles a virus pandemic that continues spreading. Despite continued high unemployment, home values have remained on the rise throughout 2020, commonly by double-digit annual percentages.

“Homeowner equity in the third quarter added another pebble to the pile of markers showing that the U.S. housing market continues to defy the broad downturn in the economy this year. Home prices keep rising, boosting the balance sheets of homeowners throughout most of the country,” said Todd Teta, chief product officer with ATTOM Data Solutions. “With the foundation under the housing market still shaky as the Coronavirus remains a threat, we will continue to monitor closely the various metrics, including equity. But as it’s been throughout the pandemic, the market is strong and homeowners remain in a position to benefit.”

Largest declines in underwater properties across Midwest and South

Northeast and West continue to have largest shares of equity-rich homes; Midwest and South have the lowest

Despite the improvement in the Midwest and South, the Northeast and West again had far higher levels of equity in the third quarter of 2020 than other areas of the United States. The top 11 states with the highest share of equity-rich properties in the third quarter were all in the Northeast and West, led by Vermont (45.1 percent of homes were equity rich), California (39.7 percent), Hawaii (39.6 percent), Washington (39.5 percent) and Idaho (39.5 percent).

Among 1,550 counties that had at least 2,500 properties with mortgages in the third quarter of 2020, 23 of the top 25 equity-rich locations were in the West or Northeast regions. The highest concentration again was in the San Francisco Bay area of California.

Among 8,679 U.S. zip codes that had at least 2,000 properties with mortgages in the third quarter of 2020, there were 379 where at least half of all properties with a mortgage were equity rich.

Highest seriously underwater shares remain in the South and Midwest

The top 15 states with the highest shares of mortgages that were seriously underwater in the third quarter of 2020 were all in the South and Midwest, led again by Louisiana (15.3 percent seriously underwater), West Virginia (13.8 percent), Mississippi (12.6 percent), Iowa (12.1 percent) and Arkansas (11.7 percent).

Among 107 metropolitan statistical areas with a population greater than 500,000, those with the highest shares of mortgages that were seriously underwater in the third quarter of 2020 were Baton Rouge, LA (14.5 percent); Youngstown, OH (14 percent); Syracuse, NY (13.5 percent); Scranton, PA (13.1 percent) and Cleveland, OH (12.4 percent). 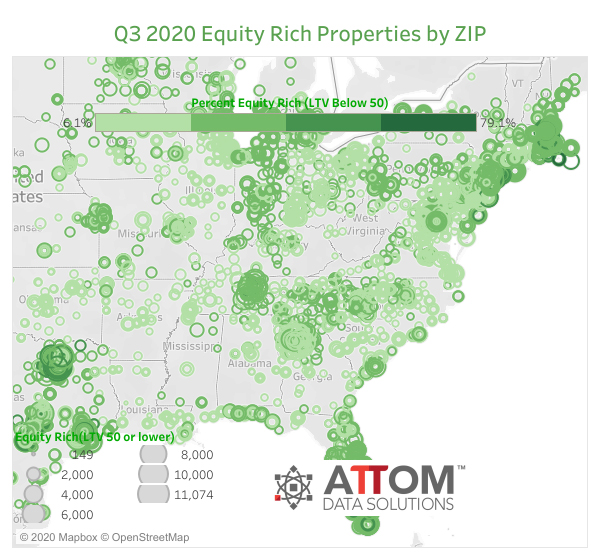