<<   Back
European investment: Which European cities will be more resilient to Covid-19? 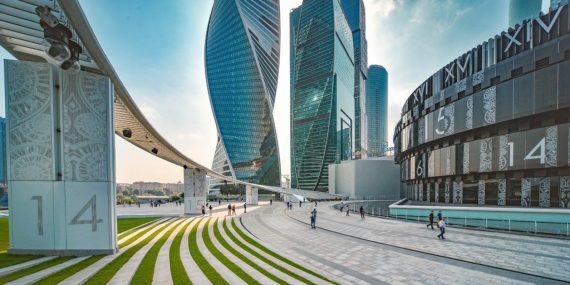 While the exact magnitude of Covid-19 remains uncertain, some European cities are already emerging as more resilient than others. Using nine different metrics from liquidity to the handling of the current crisis, London, Paris, Berlin, Stockholm and Frankfurt make up the top five most resilient cities.

Whilst investment activity during the first quarter of the year has been surprisingly resilient, preliminary figures for Q2 suggest an investment volume drop of approximately 40% compared to the same months last year.

We believe transaction activity will resume along with the lift of lockdown measures, the revival of economic activity and the reopening of flights. We expect the overall European end-year volume will range between €170bn (-34% YoY) and €125bn (-54% YoY) depending on the length of the health uncertainty and on the depth of the economic impact. Yet we anticipate wide discrepancy between countries and cities.

The exact magnitude of the Covid-19 and its ripples on the investment market is still uncertain, nevertheless, it is possible to gauge and benchmark the resilience or the exposure of some European markets.

To establish which European investment markets will be more resilient to the virus outbreak, we look at nine metrics which assess the resilience to the economic fallout, the investment liquidity and what we named the Covid property shield .

Resilience to the economic fallout

There is generally a strong correlation between economic growth, notably the GDP and investment volume. Hence we believe markets that underwent looser lockdown measures, where the economy is less dependent on hospitality and retail sectors and where the expected economic growth is above average, are better placed to attract investment funds.

Using the stringency index from the University of Oxford, the share of retail and tourism in the local economy and the average GDP growth over the next three years, we believe that Frankfurt, Berlin, Brussels, Stockholm and Gothenburg should play better the economic game than other European cities.

Uncertainty will constrain investors activity to the prime segment, including prime concern over locations. Therefore, we expect core and liquid locations to be mostly targeted by investors.

For a long time, offices have been the largest asset class, accounting for the majority of the overall property investment market. Despite the rising concerns around the sector brought by this Covid-19 crisis, during which home working was largely adopted, we believe offices will remain the predominant workplace for quite some time. The office sector also concentrates on the largest investable existing stock for institutional investors. Hence, we believe liquid office markets will continue to capture strong investors interest.

Based on the results of the first five months of the year, we expect the multifamily sector, which now accounts for 18% of the overall investment volume, will continue to attract a rising amount of capital. Multifamily is an income-producing asset, which offers diversification as its fundamentals are driven by structural factors (demographics, urbanisation) rather than cyclical ones (economy). Additionally, demand and supply imbalance of all major European cities is expected to persist due to urbanisation and a shift towards renting. Cities, where multifamily is a matured and liquid asset type, will benefit from a competitive advantage.

Based on these elements, London, Paris, Berlin, Frankfurt and Madrid appear to be the most liquid markets.

Unsurprisingly, cross border investment activity dropped significantly over the course of the second quarter and we believe it will remain subdued until the reopening of the borders and flights. Some foreign capital will continue to hit the European property investment ground through international funds with a good network of European offices or fund managers. Yet we expect cities where the investment market has been traditionally led by domestic investors to be less exposed, including the Nordics cities, Paris, Hamburg and Berlin.

Additionally, we look at how markets reacted to the past global financial crisis (GFC). For instance, London and Dublin showed strong volatility. Flowing the crisis they quickly recorded dip drop in investment activity but volumes bounced back rapidly. Some markets including Amsterdam, the Nordics and some German cities simply play better the game than the overall average whilst others, notably the southern European cities recorded deeper fall of activity and for a longer period.

Overall, we expect Gothenburg, Stockholm, Oslo, Paris and Berlin will be better prepared for a quick post-Covid-19 recovery. 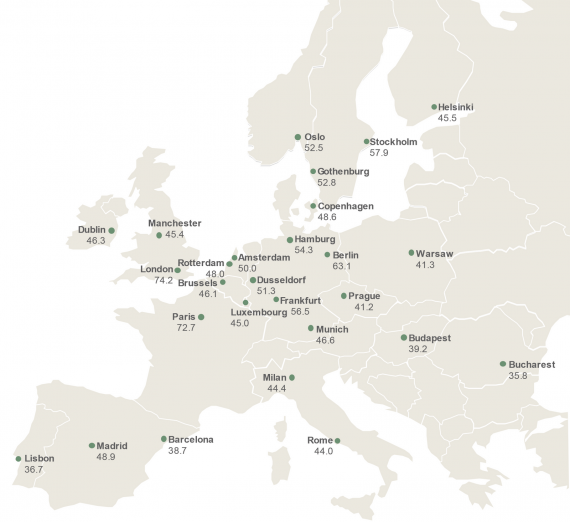 Overall, no European investment market will be immune to Covid-19, however, the depth of the impact and the speed of recovery will be different across European cities.

Depending on the stringency of lockdown measures, economic dependence on tourism and retail sectors, GDP growth, market liquidity, investment characteristics and finally contingent upon the resilience to the past GFC, we assessed the impact of the Covid-19 on the investment market across European cities. The results suggest that London, Paris, Berlin, Stockholm and Frankfurt should be more resilient.

London is the most liquid market and we expect the British capital to keep catching investors’ attention. The market is heavily dependent on cross border money however most international funds traditionally looking into Europe have an office based in London. We expect the London investment market to bounce back quickly, especially as it was attractively priced before the pandemic.

Paris is the second most liquid market. Although the recovery following the GFC was relatively long compared to other core cities, we expect this time will be different due to the intrinsic characteristics of the Parisian investment market: historically led by domestic investors with a very large share of office investments.

Berlin, Frankfurt, Amsterdam, Hamburg, Dusseldorf and Rotterdam are also liquid markets with notably a historical strong share of office and multifamily investments. The six cities recovered relatively quickly from the previous crisis. Nevertheless, on average approximately half of the annual investment turnover is generated thanks to foreign capital.

Stockholm, Gothenburg, Oslo are not highly liquid markets compared to core cities, yet investment activity bounced back quickly following the GFC. But most importantly investment activity depends very much on domestic or intra-Nordics demand. Liquid multifamily markets in the Nordic region will also contribute to the cities’ resilience. 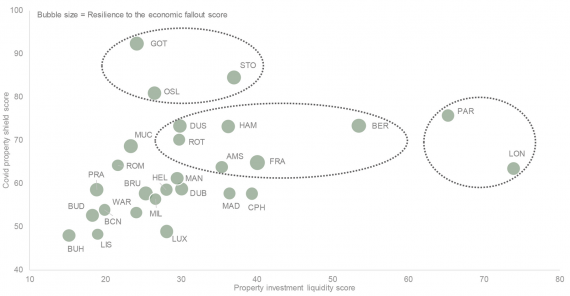 The data used for the index was collected at a city level, mostly, expected from the stringency index and the government debt which are at country level. These indicators use the latest annual data available as well as long term historical data to assess the resilience of each city through the past GFC. The various indicators have been ranked and weighted across the 27 cities.

The report intentionally does not seek to profile specific cities in order of attractiveness but to leverage the Covid-19 resilience of some locations against others. We firmly believe there is no absolute ‘best location’, company-specific strategies drive the choice of the most attractive options.