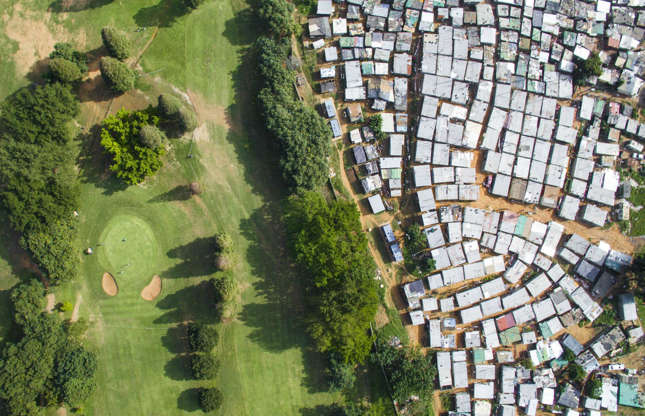 Rich and poor live side by side in some of the world’s biggest cities. In his photo series Unequal Scenes, Cape Town-based photographer Johnny Miller used a drone to capture this stark contrast in living conditions around the globe. Click through to take a look at these incredible, and sometimes heartbreaking, images. All dollar amounts in US dollars. 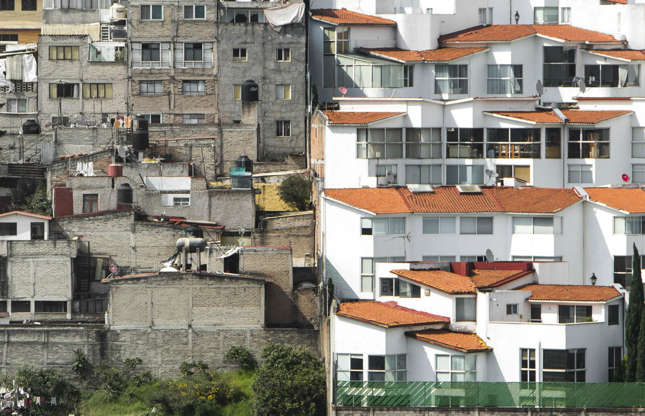 Mexico City, Mexico
Mexico is the fourth most unequal country on the planet according to income, according to the latest OECD data. The country is no stranger to poverty, with more than 40% of Mexicans classified as poor. This image from Mexico City shows how closely the concrete homes of the city’s poor sit next to the painted homes and tiled roofs of the more affluent. 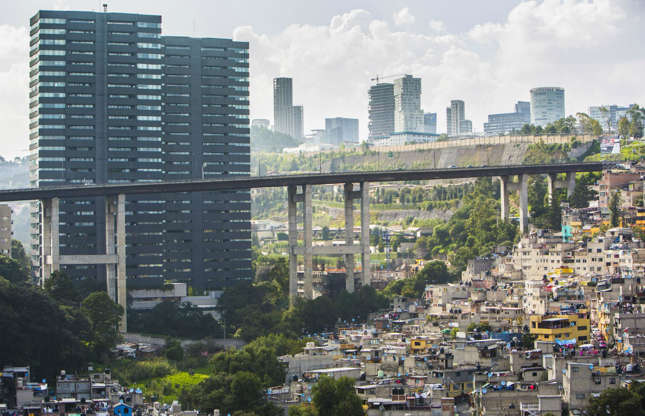 Miller also took photographs of the Santa Fe slums with skyscrapers in the near distance. The wealthy of the business world are separated from the poor by a single highway bridge. 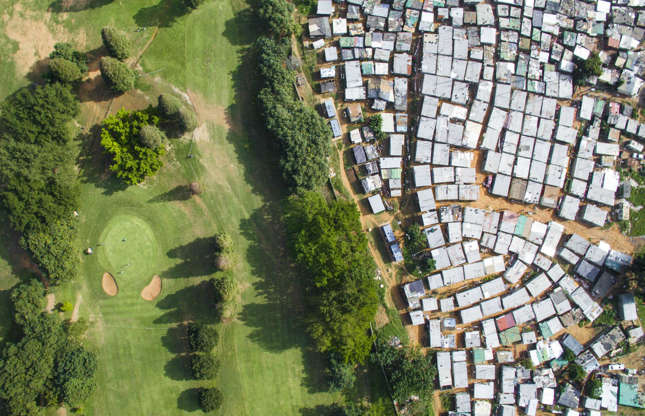 Durban, South Africa
This aerial view of Durban in South Africa shows how the Papwa Sewgolum Golf Course sits right next to a slum’s tin shack homes. “In a twist of irony, the golf course is named after an Apartheid-era golfer of Indian descent, Sewsunker ‘Papwa’ Sewgolum,” Miller told the Telegraph in a 2018 interview. “When he won the Natal Open in 1965, he had to receive his trophy outside, in the pouring rain, while the white players sat comfortably inside.”

Durban is often known as a tourist hotspot, with travel guides praising the area’s Golden Mile of beachfront that was redeveloped for the 2010 soccer World Cup. Less spoken about is the great disparity between the lives of its inhabitants. 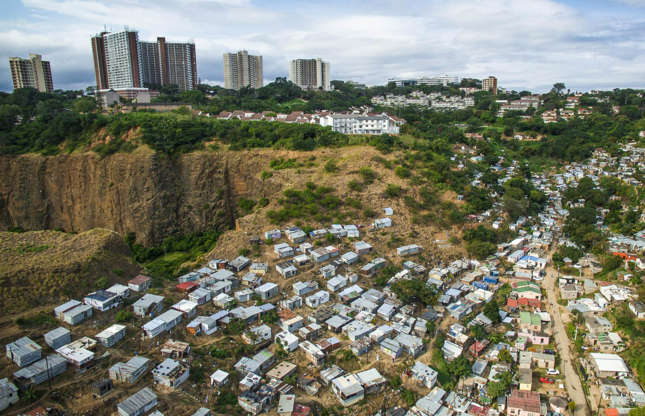 This image shows the road that leads down from Morningside to the Umgeni River, which is lined by shacks. These slums are at risk from poor drainage and torrential rain, as well as the threat of fire, while richer inhabitants sit higher up on the hill, avoiding these concerns. 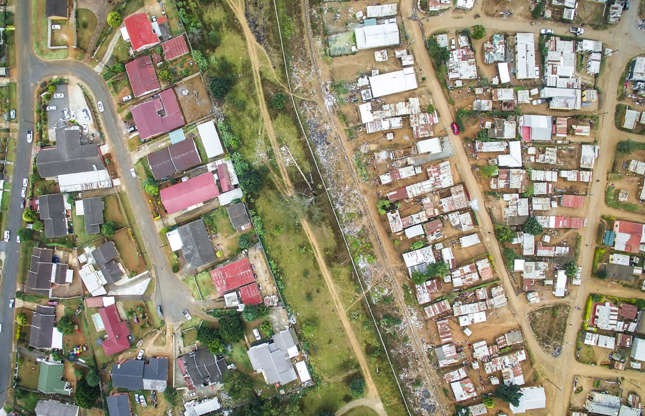 Pietermaritzburg, South Africa
Perhaps poignantly, Pietermaritzburg is the city in South Africa where Mahatma Gandhi was thrown off a train for refusing to leave the first-class carriage in a stand against racism and inequality. The Otto’s Bluff Road in Pietermaritzburg acts as a dividing line between two ways of life, a symbol of division that sadly persists. 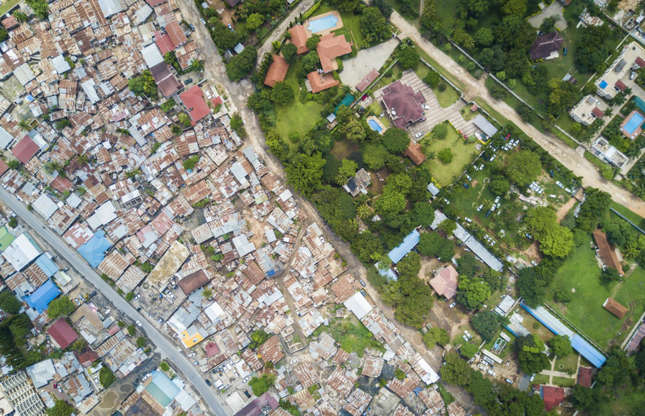 Dar es Salaam, Tanzania
Dar es Salaam in Tanzania is one of Africa’s fastest-growing cities. The former fishing village is set to see its population hit 8.6 million by 2025, according to the UN World Urbanization Prospects. Here, the poor and densely-packed slum area of Msasani on the left contrasts with the sparser and more affluent Masaki with its swimming pools and swathes of green space on the right.

The wealthy tend to live in Masaki as well as in Oyster Bay, areas that, as Miller notes, were formerly given over to the British and German colonialists. 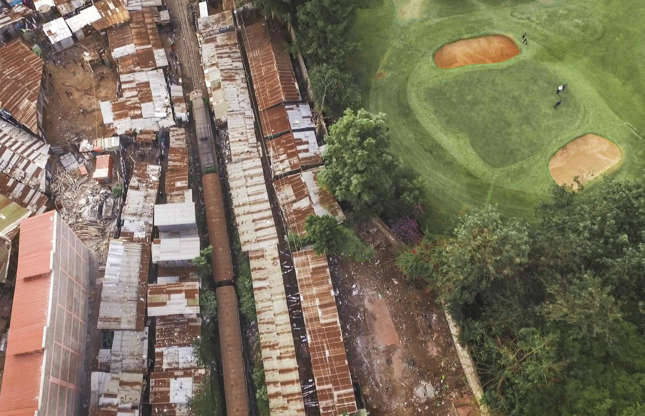 Nairobi, Kenya
The Royal Nairobi Golf Club in Kenya, which opened in 1906, has the sewage-infested Kibera slum as its neighbour. The rusting tin roofs and the lush greens are separated by a railway line that many children from the slum play on.

The slum of Kibera sits next to the affluent suburb of Loresho, with the two communities separated only by a concrete wall. 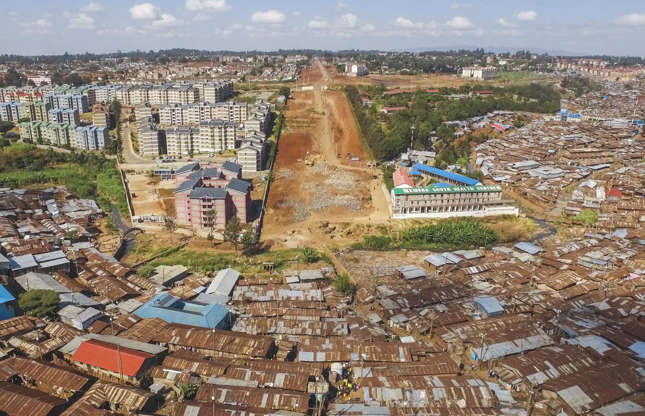 A road (pictured in its construction phase) is planned to cut through the Kibera slum, but this will only serve to displace thousands of those who call these tin and mud huts home. 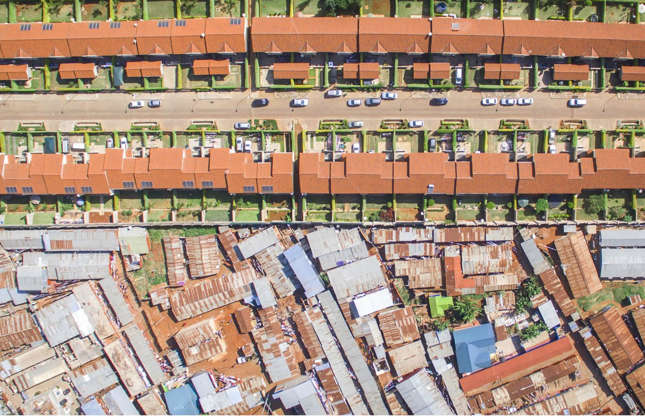 Loresho is home to Nairobi’s more affluent citizens, such as government workers and business people. Here the neat and uniform fenced-off gardens of Loresho’s rich inhabitants back onto the disordered maze of the slum’s homes. 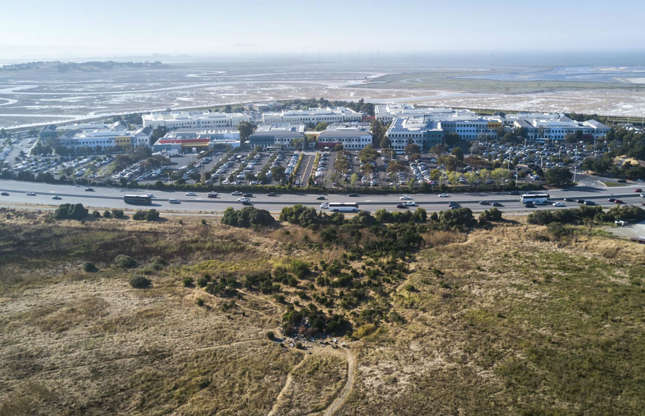 Palo Alto, USA
Silicon Valley has a problem with poverty. It may be the home to global multimillion-dollar companies, but it is far from a perfect scene. In this image in the foreground a patch of tents can be spotted sitting just across from Facebook’s headquarters, a company currently valued at $725.5 billion (£560.3bn) (as of 17 September 2020). 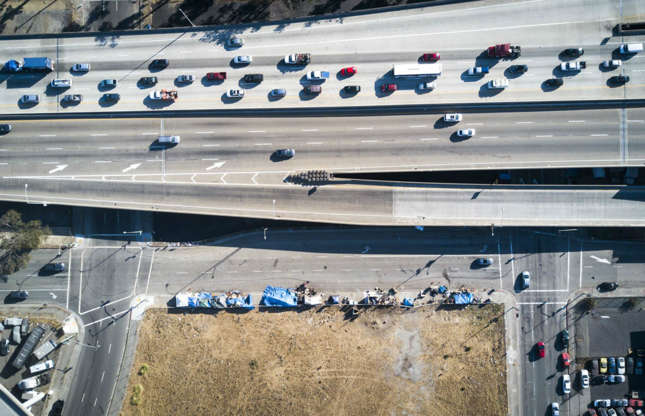 Oakland, USA
Just across the bay from San Francisco, Oakland’s housing market is following its expensive neighbour skywards. This has had a shocking impact on the lives of its inhabitants, as the sharp rise in house prices and rents has acted as the catalyst to not only a housing crisis but a homelessness crisis in the area. 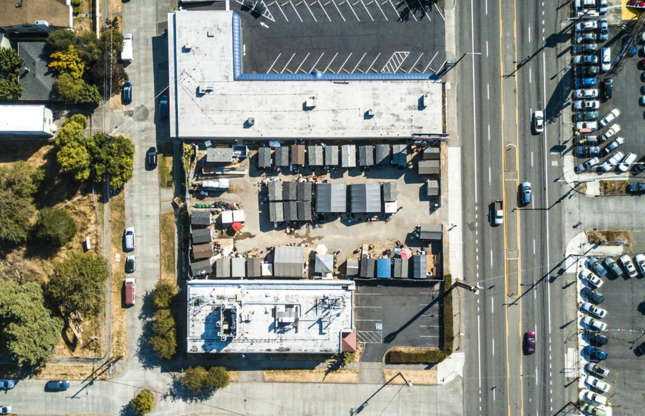 Seattle, USA
Similar scenes are captured further north in Seattle. Shockingly for a city known as the birthplace of globally successful companies such as Amazon, the city entered a state of emergency in 2015 due to its homelessness crisis. This led to government-sanctioned tent cities, such as this one, being set up to help deal with those looking for somewhere to live. Note that the camp is hidden so that it can’t be seen from the street.

At the time the mayor called the situation a human tragedy “seldom seen in the history of our city”. Yet the crisis continues five years after the state of emergency was declared, with many calling on the government to provide more affordable housing to help. As the coronavirus pandemic hit the authorities set up a socially-distanced “safe sleeping village” in an empty McDonald’s parking lot near City Hall, with markers on the ground for up to 50 tents.

Often those living in tent cities have to move on when the government’s lease on the space ends. This image was taken in the Alaskan Way Viaduct – a slightly more attractive site due to its roof protecting inhabitants from rain – days before it was slated to be closed. A sign threatened fines for not vacating. There are other camps too, such as this one that has popped up outside of the sanctioned sites. 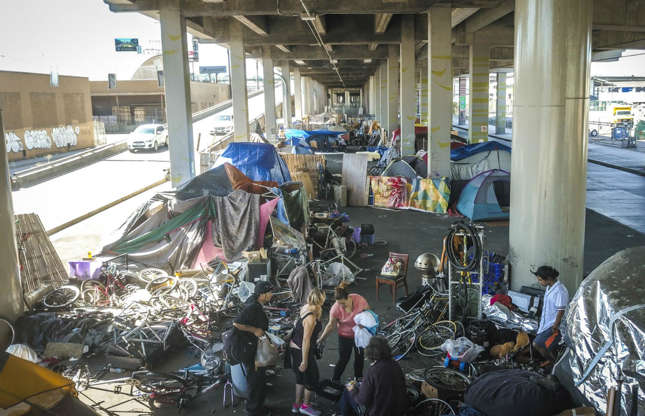 According to a 2018 report by consulting firm McKinsey & Company, King County government – the county that includes Seattle – would need to double annual spending to $410 million (£338m) to solve the crisis, assuming the annual rate of homelessness doesn’t increase. 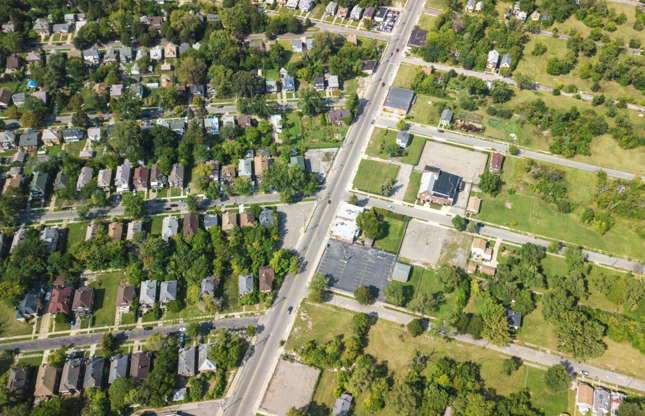 Detroit, USA
Detroit’s economic comeback has been heralded by the media. The city has seen a flood of ‘hipsters’, and the opening of a new hockey stadium. But decades of economic difficulty have left their trace. Woodward Avenue, pictured here, cuts a trail through the whole of Detroit and often exposes those who are merely surviving on one side against the wealth of others living on the other side. 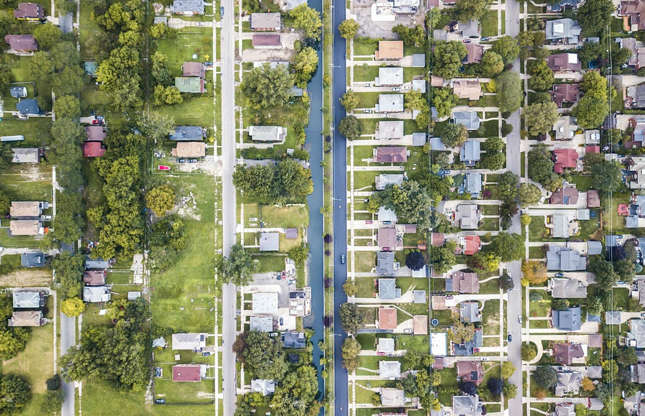 Grosse Point, on the right, isn’t technically within Detroit’s boundary, but is known as one of the city’s wealthiest areas. A canal separates the neighbourhood from Jefferson Chalmers, which although it has fewer houses is much less affluent. Many areas in Detroit are almost lifeless in comparison to their past. Black Bottom, pictured, used to be a lively area, but has suffered from years of neglect. Now, like many areas of Detroit, these aerial images reveal the cracked concrete of its almost abandoned streets. 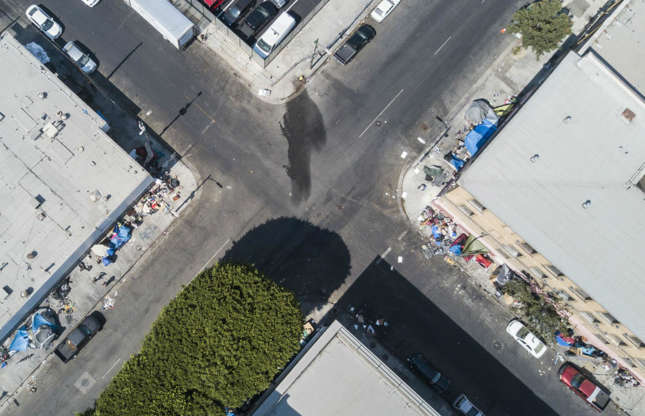 Los Angeles, USA
Skid Row in downtown Los Angeles is an area synonymous with homelessness and inequality. The tent city stretches over several blocks, and is in stark contrast to the more affluent parts of downtown LA, where high-rise buildings sit next to more historical buildings such as the Frank Gehry-designed Walt Disney Concert Hall. 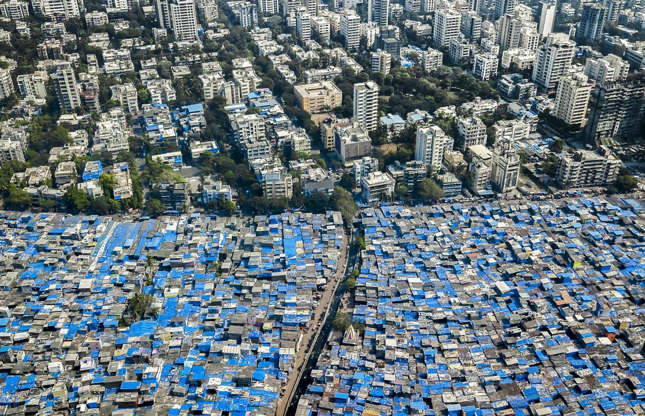 Mumbai, India
Mumbai is densely packed with more than 20 million inhabitants. Not only that but the city has the largest slum population of any city in the world. In fact, as many as 43.1% of Mumbai’s population lives in slums, according to the most recent census, similar to the one pictured, where blue tarpaulin is the only defence against the monsoon season. A study released recently has found that more than half of residents living in Mumbai’s crowded slums have contracted coronavirus, where the disease has been spreading much faster than among richer parts of the population. 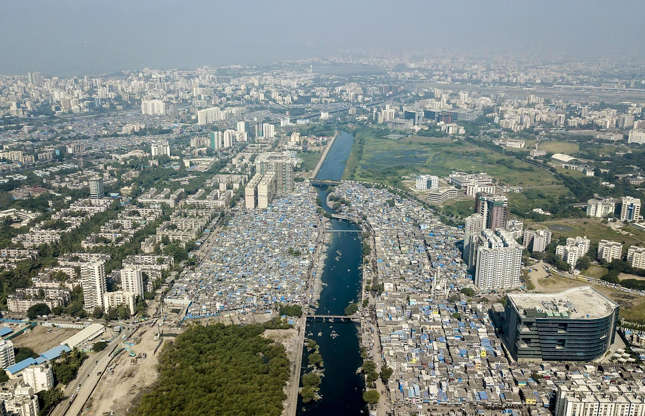 Mumbai’s Dharavi slum (pictured) is the largest in Mumbai, and the second largest in Asia, with an estimated one million inhabitants. What’s even more shocking? The slum, which was the setting for the film Slumdog Millionaire, has a high literacy rate of 69%, making it the most literate slum in the country. This is due to India’s failing economy, which has the worst levels of unemployment in 45 years according to a government survey, with many highly-educated people unable to secure work.

Miller reveals he used the knowledge of others to work out where to capture images using a drone. “In Mexico City I relied on advice from a helicopter pilot, Carlos Ruiz. In India, I used PK Das’ slum maps. So there are a variety of ways I do my research.” Here a slum is almost entirely enclosed by skyscrapers. 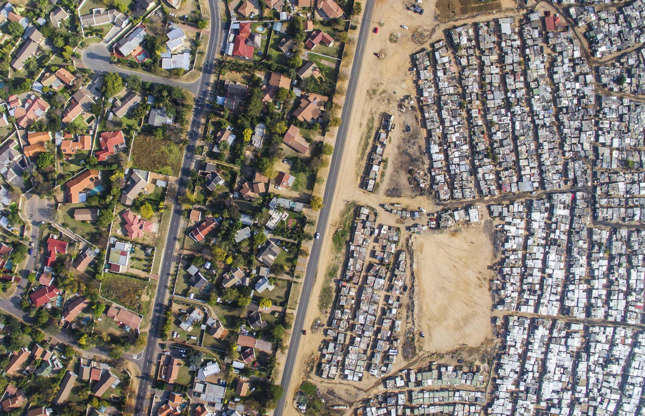 Johannesburg, South Africa
South Africa was named as the most unequal country in the world in 2018 by a World Bank report. Despite the end of Apartheid in 1994, since 2011 at least 2.5 million South Africans have fallen into poverty. This can be seen in images such as this one, taken over Johannesburg, where the Kya Sands slum faces the affluent, leafy suburb of Bloubosrand. Large houses with swimming pools are separated by just a single-track road from the poverty of the tin-roofed shacks. 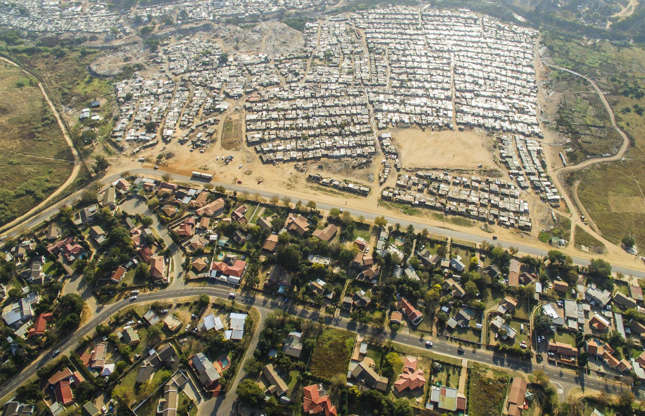 The Kya Sands settlement isn’t the safest place to live either, and is at risk from fires spreading through the wood and plastic structures, and dirty water. “If you look even closer, the main thoroughfares in Kya Sands are actually drainages for the black, filthy water emanating from the nearby creek,” Miller says. 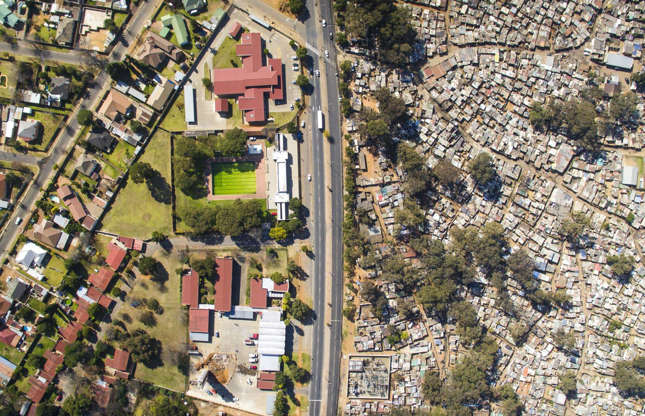 This picture of the affluent Primrose area on the left and the Makause settlement in Johannesburg once again shows just a road separating extreme wealth from poverty. Sitting on an abandoned gold mine, the two places embody Apartheid, even 23 years after it was abolished. Primrose was named after the daughter of the British financier Barney Barnato in 1886, while Black Africans lived separately in Makause. Today, little has changed.